As yet another year grinds to a simpering halt I’m feeling the warm, familiar inner glow which usually comes with the urge to depart from tradition.  And what better time of the year to depart from convention?   And under what better circumstances? This is the first festive season in my adult life I’ve been unemployed. I departed from that tradition two months ago.

I struggle, gainfully employed or otherwise, to be jolly in this short period which barely separates being “jolly to all men” and nostalgic and maudlin over something ending and a new beginning. One would think after so many “festive” seasons one would become accustomed to the routineness and regularity of “auld lang syne” but I digress. Which is something else I must address in 2014. Another bloody list. It’s relentless..

My radical departure from tradition this year is not to be overly Jolly, excessively cheerful or annoyingly joyful, but to be content with posting a “list”. A list from 2013.

This time of year brings out the list makers in their droves. More so now than ever with facebook and other social media.  Some even compile lists of the awful things which have happened. Or personal experiences they hope will remain in the year past, or disappear over the cliff 2013 is about to fall off. It may seem courageous and optimistic to gloomily and negatively swim against the festive and positive tide of tradition and “rake over the coals”of 52 weeks as they come to an end but they do and will. Don’t take it as the theme for my year though. 2013 presented me with some outstanding “firsts”. Although I don’t think opening a twitter account counts.

Slaving away at my “Names I Shamelessly Dropped in 2013” list ,it dawned on me that due to my freshly minted classification as unemployed person, ex  talkback radio person, I no longer exist on the lists of a few local political parasites who once brazenly urinated in my pocket in order to get air time.  My name has been dropped. Completely.  In my business having your name ‘”dropped” is usually a good thing. Any publicity is good publicity. But “deleted” is a whole other list. 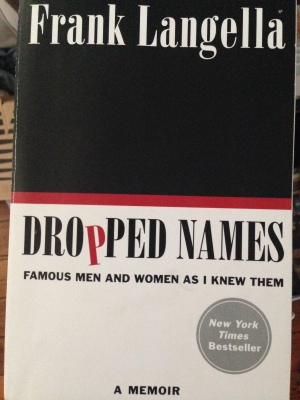 But back to my contentment and some serious name dropping. Dave Letterman, Tom Hanks, Barbara Walters, Biff Henderson and “that” guy from Arrested Development”. And the supplementary list…. Elvis Presley, Mama Cass Elliot, Karen Carpenter and Frank Langella.

Wandering aimlessly around New York City in May I found myself on W 54th St. There I spotted a crowd of people on the other side of the street. Across from them and directly in front of me, stood a temporary barricade which blocked my path forward and that of four or five men with cameras around their necks all straining over the hindrance.

Their focus alternated between on their left, a plain steel door in the middle of the side of a block long brick building and the orange witch hatted parking spot to their right. As I neared the commotion a woman who looked familiar stepped from a big black shiny car. She looked a bit like Barbra Walters but she couldn’t be that old. Surely. Surely it was the iconic TV anchor person because the adoring bunch of, mostly young fans, across the way was yelling her name.

Barbara posed briefly for the paparazzi then she and her three person posse disappeared inside, through the plain steel door.

I moseyed further on down W 54th past the scaffold covered brick walls, some of which almost completely, from me anyway, hid something else familiar, a small deli. On I ventured to what turned out to be Broadway. But before reaching the famous junction, I was funnelled into a queue of excited people. Not unusual for New York. Chatting to the woman next to me in the line of hopefuls, from Bugtown, Idaho if I recall correctly, I discovered I had joined one of two separate lines snaking their way around the corner to our left, for tickets to the Tonight show with David Letterman. Ours was the Standby line though. I also discovered from my Bugtownian friend that Tom Hanks had been Dave’s guest yesterday. Damn it. I’m in the queue which won’t get me into a show which had the legendary Tom Hanks only yesterday. This always happens to me.

The long line of much happier and decidedly more animated folk up ahead of us, actually in front of the Ed Sullivan Theatre, was filled with those who actually got tickets to see Letterman. I understand you have to book months ahead.  They were being instructed by the warm up guy on how to behave when the big show got underway inside. A lot like the spruikers on the boards outside boxing tents in sideshow alley. “Even if you think Dave isn’t funny today, laugh anyways and laugh loudly too because the folks at home need to be considered” he lectured. The warm up guy was in fact the warm up guy for the warm up guy who whips the punters into a new frenzy once they’re inside. But the outside warm up guy was very entertaining none the less.

Alas only the first four people from our mob of fifty hopefuls actually got in to see the taping of the Thursday show.

I loitered around “The Great White Way” like Elvis Presley, ineligible after a recent sighting, skulking outside the Dead Legends Cafe as Mamma Cass and Karen Carpenter scoffed food inside. Not as shattered as most in the standby line as it was serendipity which landed me in the queue in the first place not pre booking. It was then; right there in front of the famous Ed Sullivan Theatre on Broadway and 54th St New York City, a clipboard wielding woman approached me. A woman from the The Late Show with David Letterman. My Elvis skulk must have made an impression on her… “Would I like two tickets for Friday’s show which would be taped later in the day right after the taping of the Thursday show”? YEESSIRREEEBOB!!

While I was killing time, I saw the legendary Letterman floor manager/funnyman “Biff” Henderson taking a break during a break between taping, leaning on a wall of a building across from the stage door on W 54th St through which Barbara and her posse would soon sweep and get back into the waiting limo and when, I guessed, Dave would take a nap and get a fresh clean white shirt and different suit and tie for the Friday show taping. Excitement was building.

Eventually the time came and we were all shepherded into the famous theatre to see the show.  After Dave’s equally famous monologue, his first guest, that guy from Arrested Development, Will Arnett strode, sockless onto the famous set and sat down to chew the fat with Dave mostly about wearing slip on shoes and no sox.

Your take on name dropping may be slightly different from mine, but it’s all entertainment after all. As I discovered during the commercial breaks of the taping of that Letterman Friday show on that Thursday in May in New York City. But that’s another story.

And Frank Langella? I bought a copy of his book “Dropped Names”  (Famous men and women as I knew them) at a boutique book store underneath the “Rock”. It’s hard to stop name dropping, especially about NYC. Highly recommend the book.