When writing about matters of ladies’ parts it’s important to try and be mature and broad minded.

As I hail from an era (and the Island which gave birth to the euphemism) when the ladies’ “down there” region was referred to as her “Map of Tassie,” I rarely venture over the Bikini Line. 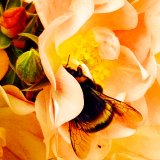 I recently wondered as to the origins of the “the Brazilian.” Apparently it has nothing to do with the association between the alarming rate of the clearing of Brazilian rain forests and the demand for a personal  “clear felling.” Turns out it’s just a name among many for a trend in body haircare along with “the butterfly,” “the cricket pitch” and the fashionable sounding “Hollywood” (also known as “sphinx”), where the pubic hair is completely zapped.

Hollywood star Cameron Diaz wasn’t splitting hairs when last year she launched a full frontal attack on those who opt for the “napalming” of their nether regions in the name of fashion.

Favouring the natural look, Ms Diaz candidly suggested that trying to get rid of one’s pubic hair “is like saying ‘I don’t need my nose’”.

While Cameron’s controversial comments cast a five o’clock shadow over the downy debate, another round of fur has just hit the fan. Thanks to a new so called “Vagina poster girl,” model Hannah Davis, who features on the latest Sports Illustrated swimwear cover, the plot has thickened – or in this case, thinned. Apparently the mons pubis (the mould of skin covering the front of the vagina) is no longer deemed attractive and can be “corrected.”

According to author Wendy Squires writing in The Age…

…in a teeny tiny bikini with her thumbs hooked in her bottoms, pulling them down so low they may as well not be there, that vagina of Ms Davies is about as hard to achieve as Senate approval for Joe Hockey’s budget.

It is the mere mention of this once unmentionable “unmentionable,” the mons pubis, which has Ms Squires positively bristling.

She claims to have been “blissfully unaware that this is the term for the small deposit of fat over the female pubic bone and as fat and fashion are not friends the new body obsession dujour is the holy grail of a mini mound.” She says, “The only way to get this streamlined snail trail is through monsplasty surgery, also known as a pubic lift, to reduce and tighten the mons pubis region.”

If that famous Tasmanian Errol Flynn were around today, I wager there would be “hell-to-pay” over all this trimming and repositioning of his favourite birth map.