Clint Eastwood was the very first person I ever saw on Television. I remember it vividly… in flickering black and white, way past 7.30 on a school night. My squinting and spellbound siblings and I huddled together, our faces just inches from a small screen encased in a large handsome walnut piece of furniture, captivated by an image magically radiating RAWHIDE into our lounge room. 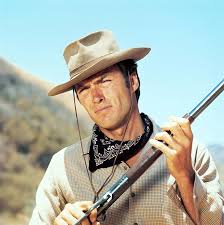 The HMV 24 inch had been delivered, unpacked and “warmed up” by two men from the store that afternoon. My father had had a “good result” at the racecourse the previous Saturday and the result for we kids was “Rowdy” Yates.

The hit Western starred Eric Fleming as Gil Favor, the boss of a cattle drive, and a young Clint Eastwood as his softly spoken but deadly serious sidekick, “Rowdy” Yates.

I had of course seen a TV before but never in the comfort of our own lounge room.  We’d been invited to watch by the rich childless people up the road who had the first TV in our street; and had more than once loitered outside the Retravision store in the city which had banks of TVs flickering away in the display window. But now we were legit. We had what was then called a “set”. A TV set.

Clint’s Wagon train quickly rolled on from TV and made him a fistful of Hollywood dollars.

Heartbreakingly though, my contribution to the “box” failed to extend past juggling on the TAA Junior Flyers Club Talent Quest, and when I grew up, a short stint as a TV Weatherman.

These days I just yell at the TV. I suffer from the nasty and modern anti-social habit of Yelling at the TV or YATTV.

A fairy-tale journey which began as a wide-eyed, courteous 10 year old, sitting silently in awe before a  black and white TV watching a whispering “Rowdy” Yates, has, paradoxically transformed  into a full blown case of the modern and largely misunderstood affliction  YATTV.

Comedian Billy Connelly suffers from YATTV. Though in Billy’s defence, his YATTV only materialises while watching Nature programs. And Connelly’s yelling at the TV actually is positive and saves lives.   Apparently he yells to warn gormless Wildebeest happily grazing on the Serengeti Plain, of lions creeping up to eat them in David Attenborough docos.

My YATTV is just negative and futile.

From a bit of harmless “recreational” yelling on a Friday Night at “BT” the Ex- Football meathead now commentator on Channel 7’s AFL coverage, to downright scathing rants Mid-Week at the helpful and useful ABC consumer program “The Checkout”, and the regular smug stabs at Kochie and Karl and Lisa before breakfast.  I’m full spectrum.

My habit has grown to the extent that I now yell at the TV most of the week.

On a recent Monday I knew I had a serious YATTV problem. Early in the night I was able to resist the strong urge to savage Leigh Sales’ choice of blouse, and remain controlled as dear Caroline Jones introduced yet another Australian Story, but I lost all self-control and succumbed to shamelessly sledging the treasured Television Trifecta of Kerry Obrien, Paul Barry and Tony Jones. I had totally lost it.

Scant research into YATTV has revealed little other than that a major section of society also suffers but is in almost completely oblivious.  The most reliable opinion on why we yell at our television apparently involves the creation of the remote control.  Which IMHO has merit.

Back in the day one had to lift one’s fat arse off the couch and slovenly drag oneself across the tortuous acres of wasteland between it and the “set”, and do battle with a large dial in order to change the channel. By the time you’d returned to your spot on the couch you’d lost the urge to yell.

Endowed with a long slender black/grey device, studded with colourful buttons we become GOD.  Constantly pointing and prodding, instantly selecting and dismissing anything which appeals or fails to take our fancy. Threatening and taunting a television as slim as one panel of the cardboard carton out of which our HMV 24 inch magically emerged and almost as large as the room my TV journey began in. Commanding our TV…GO AHEAD Q AND A MAKE MY DAY.

“Rowdy” Yates would be dumbstruck.