Skip to content
Bronwyn Bishop has left the building. A building over which she had a terrifying and undemocratic influence since her political love child Tony Abbott gifted her the prime role as Speaker of the House  in 2013. But she will be back, not in the big seat at the front or even one at the back but undoubtedly back in the faces of those whom she believes betrayed her. And Tony Abbott would be at the very top of the BISH list. 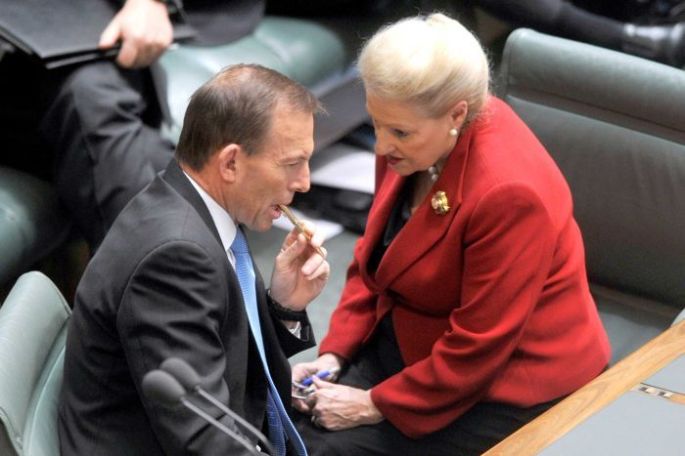 “It’s not the end. It is simply a change of direction and I look forward to serving further” Bronwyn Bishop April 2016

The hard lady of conservative politics with a hide tougher than a mountain goat’s knee was eventually  “choppered out” of office after the rarely used but usually effective method of crowbars, failed.
Embarrassment  heaped upon humiliation was to follow with a bruising and public “boning” by the pre selectors in the safe Liberal Northern Sydney Beaches seat of McKellar.
The 73 year old former speaker made her valedictory speech last week and left with head and hair held high but not before slapping down the warning … “there is much more than meets the eye….in that saga (Tony Abbott), but not for now”.  Was this just the vague threat of a woman scorned or is a book  already in the pipeline?  IS TONY ABBOTT CATHOLIC….?

You can bet your personally autographed “Ditch The Witch” placard a tasty “tell all” is being tapped/hammered out as we speak. And obviously a book penned by Bronwyn Bishop while in a full fit of pique would contain considerably more spite and poison than a tome of John Howard’s recollections of a lengthy period in federal parliament. Such a book would guarantee sales in excess of other nasty political tales such as the Latham Diaries and Nikki Savva’s Road To Ruin.
But more to the point, what to call such a potential political best seller?

HOW I OUTLASTED BOB ELLIS ( by a month)

THE TWO BRONNIES (the other side of Bronwyn Bishop)

To a degree, Bronwyn Bishop  can seek succour from stubbornly sustaining a long and colourful career: a nice plump parliamentary pension to cover hairdresser’s costs to begin with.
Sadly for Ms Bishop though, decades of public service will be scattered far and wide under the slashing roto-blades of the self serving saga known as “choppergate” . The reality of the  scandal which grew powerful wings unnecessarily will hover forever over Bronwyn Bishop like a roaring squadron of Chinook military attack helicopters wherever she goes. And that will cost a small fortune in hairdressing fees.

And there’s your book title…. THE WHIRLYBIRD STILL GETS THE PERM