ROLLERCOASTER of emotions was again set in train on Friday for the family and supporters of murdered Canberra woman Tara Costigan.Marc Rappel, Ms Costigan’s ex-partner, was imprisoned for a minimum of 26 years for the brutal murder of the mother of three in 2015.This week the family is involved in the second National Family Violence Summit – two days of intensive presentations, keynote addresses and panel discussions, which it initiated after Tara’s murder.Keynote speaker is Emma Murphy who powerfully used social media to break the silence around her experience of domestic violence.

AUSTRALIAN Christian Lobby CEO Lyle Shelton took a dim view of the rainbow flags fluttering about Canberra for several days to celebrate legislation automatically recognising same-sex unions from overseas in the ACT.Shelton argues the flags should not be flying from poles on public land, saying: ”If the government is going to make it open for political causes to have their flags flown, there has to be equal preference for all political causes”. 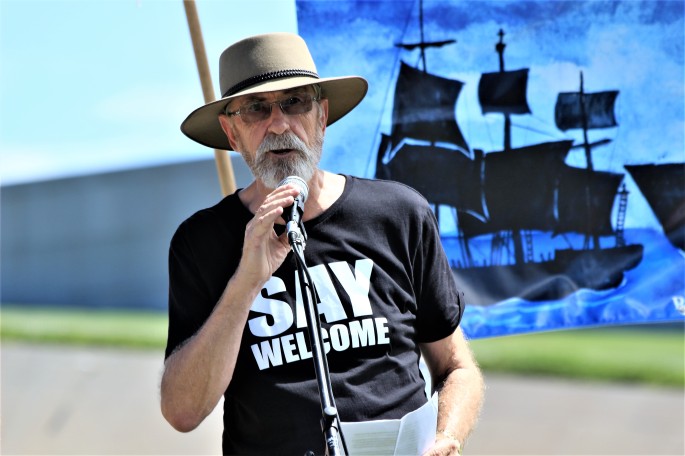 WHILE long gone from politics, former Labor MLA John Hargreaves returned briefly to cast what he claims is an authentic five o’clock shadow over the Assembly.
Responding to the beard barbs exchanged by CM Andrew Barr and former Opposition Leader Jeremy Hanson, Hargreaves proudly posted a pic of his own lush, grey growth taunting Hanson and Barr’s wispy efforts with: “That’s not a beard…etcetera.”

Hargreaves urged Canberrans to do likewise in a quest to separate “bumfluff” from the genuine article.

Why else would the Labor leader take aim at the former radio man over an issue as trivial as an advertising campaign Parton did for Rolfe Honda before being elected to the Assembly?

Barr sniped that the car dealer would lose trade over its association with the Liberal MLA given Canberra was largely a Labor town.Barr is savvy enough to know that Parton will eventually lead the Libs and that Labor will finally have competitive opposition.

Stephen Skehill, the Assembly’s ethics and integrity adviser, has ruled Parton did not breach any codes of conduct.

LEAVE your attitude at the door with your hat, mister. That’s one of the house rules of a new Canberra nightclub that offers female patrons more space and respect from the opposite sex.

Owner of the Maple Bar (upstairs from the Treehouse Bar) Mike Kadinski says he spotted the “old school” rule at a Sydney restaurant.Mike says there is no rule which says men can’t approach women, but gentlemen who are admitted understand they must treat women with ultimate respect.Another house rule is that nothing is on the house except for the roof.

HEARTWARMING tales of extreme generosity and practical guidance have emerged in the wake of the destructive fires that swept through the small farming community of Carwoola on February 17, with social media again proving an invaluable communications tool.

A Facebook group, which now has almost 900 members, was swamped with offers of help within hours of the disaster that wiped out more than 3000 hectares south-east of Queanbeyan.One man offered his pink party bus to transport rescued pets and bales of hay.

FRUSTRATED local cyclists claim ACT drivers are still largely unwilling to give them more room and cite a lack of policing of the “Metres Matter” laws as a major contributor.

Stats obtained by FOI reveal just two motorists have been fined and another three cautioned since late 2015.

Motorists must give cyclists a 1 to 1.5 metre (depending on speed zones) berth when overtaking.