By Mike Welsh in the CITY NEWS AUG 7

AM more suspicious than ever of results obtained from automated phone polling after being one of 717 Canberrans to receive an unsolicited dinner-time call seeking our opinions on pokies.

Reachtel’s recorded voiceover man offered me three options to a series of slightly confusing questions on the impact of poker machines.

I get these calls often, possibly because I often “agree” to participate. I sometimes identify as an unemployed, single, lapsed-Catholic female aged between 30 to 40 (with my own teeth) who never plays pokies.

THE survey also sampled the current state-of-play of the local political scene. Apparently Labor has fallen to 36.4 per cent (down from 38.4 per cent at the last election), while the Liberal party is up 2 per cent (38.8 per cent) since October. But with more than three years until the next ACT election, CM Andrew Barr won’t be losing any sleep over the results.

HOWEVER, ACT Greens leader Shane Rattenbury may be missing serious shuteye after the debate on the local greyhound ban became personal and petty.

The MLA was “mauled” by talkback top-dog Ray Hadley after making damaging allegations against local trainers. On 2CC Hadley described Rattenbury as “a grubby little man” resembling an “unmade bed”. Though it won’t be childish insults that will bring Rattenbury the most grief, it will be the surgical precision with which the civilised and professional 2CC drive announcer, Chris Coleman, is prosecuting the case. 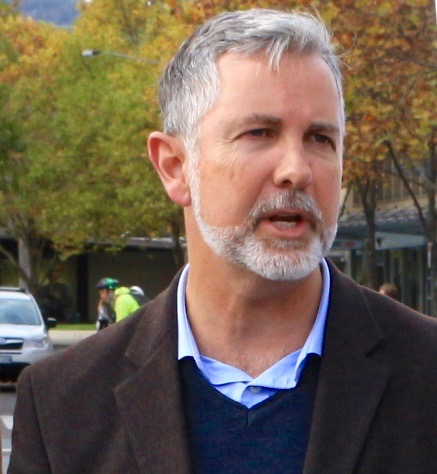 THE Canberra Libs appear to be in semi-election mode, flogging a law-and-order issue. Shadow A-G Jeremy Hanson is pressing the government to give police wider scope to deal with a seemingly greater threat to public safety, posed by warring outlaw motorcycle gangs in Canberra’s south.
Hanson says: “It’s clear from the words of the chief police officer that community safety is at risk and it’s only a matter of time before somebody is killed or seriously injured”.

THE anti-vaccination movement surreptitiously slid into Canberra and screened the controversial movie “Vaxxed: From Cover-Up to Catastrophe”. At the invitation of the Australian Vaccination-Skeptics Network (AVN), makers of the doco finally screened the 90-minute film for about 180 locals at an ANU lecture theatre, but not before some cloak-and-dagger shenanigans.

Fearful of disruptive protests, those attending were instructed to park at a designated spot (at ANU) and wait for a text 20 minutes before start time, for details of the venue. The film is a pinch and a punch. As a doco it packs a punch, but must be taken with a pinch of salt. Think a Michael Moore film without Michael Moore!

FOLLOWING the screening the ANU says it was unaware of the controversial claims (vaccination causes autism) made in the documentary. A spokesperson says the screening was a private booking and “was not in any way endorsed by the university”. Controversy has dogged the movie, including being cut from the line up at the prestigious Tribeca Film Festival in New York by one of the festival’s owners, actor Robert De Niro. Tasha David, president of the Australian Vaccination-Skeptics Network, says “claims that the AVN or ‘Vaxxed’ implied the ANU endorsed the film are false”.

LIBERAL MLA Steve Doszpot can rightly claim to have saved the early career of SBS’s Mr Football Les Murray, who died recently at the age of 71. In his 2006 memoir, “By The Balls”, Murray tells how after a short stint at Channel 10 ended abruptly, his career was immediately rescued “out of the blue” by a call from Doszpot, “then a mover and shaker of Canberra City, alerted me to a vacancy at CTC 7 in Canberra. I got the gig. It kept me alive and warm as a football commentator. I had no visible television prospects”. Doszpot, who played with Murray and the legendary Johnny Warren at Sydney club St George Budapest, also co-commentated NSL games with the man who would become synonymous with the world game the length and breadth of his adopted land.