AFTER almost a year walking from Perth to Canberra to deliver a message of justice for his people to Prime Minister Malcolm Turnbull, Aboriginal activist Clinton Pryor turned his back on the PM. 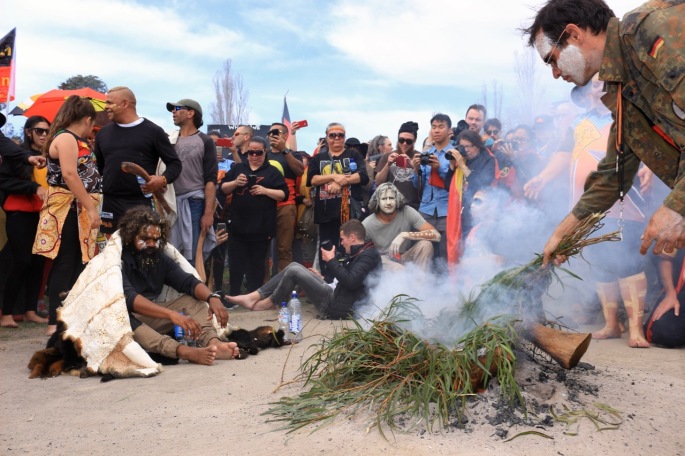 The “Spiritual Walker” met with Opposition Leader Bill Shorten in front of Parliament House but later became frustrated by the Prime Minister’s “disrespectful” attitude. Pryor said “we were disappointed we had to walk around the back to meet him, he should have came out and seen [sic] me after I walked so far to see him”. The 27-year-old activist also spent time posing with large groups of school children visiting Parliament House.

MEANTIME Geelong man John Olsen was on hand to greet Pryor, honouring a promise he made when the pair’s paths crossed in the WA outback last year. The 65-year-old Olsen, nearing the end of his walk from Cape York in Queensland to Cape Leeuwin in WA to raise awareness and funds for the rare genetic disease Leukodystrophy, had vowed to be at the Tent Embassy when Pryor arrived.

AND still they come. Melbourne Salvation Army’s Maj. Brendan Nottlehas begun a 700 km Walk-the-Walk journey to Canberra to raise awareness and funds for the homeless and, like Clinton Pryor, has a strong message for the PM. The major plans to take 40 days to reach the capital to highlight the desperate plight of the homeless whom he says “are the forgotten people of our community. They’re the voiceless”. He said Canberra needed “a kick up the backside” over its inaction on homelessness.

REVELATIONS of more than 700 pieces of contraband, including knives, mobile phones and drugs, confiscated from within the Alexander Maconochie Centre in one year, has left former superintendent Doug Buchanan incredulous, describing the haul as “outrageous”. The now retired Buchanan who was seconded to the AMC from NSW in 2010 says: “This is a policy failure, the direct result of policy being written based on what staff can’t do rather than what they can do to stop contraband being introduced into the centre”.

Initially boasting a “groundbreaking” design, an observance of human rights and a primary focus on rehabilitation, controversy has dogged the AMC from day one.

CANBERRA Libs were scarce at the recent Equal Love rally in Civic. But the Opposition spokesperson for gaming and racing Mark Parton appears to have broken ranks while also having an each-way bet on the divisive issue. Parto enthusiastically applauded rally speakers including CM Andrew Barr after bagging him on Facebook. Parton posted: “It doesn’t matter how you spin it, this is ratepayers’ money being spent to support one side of a national plebiscite. It should not be happening. If Barr wants to support the yes campaign, he should do it with his own money.”

A SOUTH Canberra mother posted a blunt message on Facebook to whoever placed a razor blade on a slide at a local playground. Donna Chandler-Brownsaid: “Didn’t think I would ever have to post something like this, here goes. To the f***ing grubs that put a pulled-apart razor blade on the slide at Lanyon Park cutting my six-year-old daughter’s finger open. Hope you have fulfilled your sick, twisted fantasies of cutting young children”. Chandler-Brown says among the hundreds of responses was another mother sharing a similar story.

WHILE not a “true” Canberran, international cricket’s new superstar Nathan Lyon’s roots run deep in the capital. After ripping through the Bangladeshi batting line up (taking 22 wickets in the two test series) the man they call “Gaz” (after AFL player Gary Lyon) is being compared with Shane Warne. Born in Young, Lyon came to Canberra as a youngster learning his craft playing for Western Districts and UC cricket clubs before debuting for the Comets in 2008. Lyon moved to SA in 2010 and was awarded a baggy green in 2011.

RIP Connie Johnson. You made a difference.