“Don’t worry. It’ll all be over soon.” Is an oft-repeated phrase I’ve heard on radio regarding the marriage equality debate.

But why take my word for that? Here’s what Simon Copland from Green Agenda had to say in 2015: “For more than a decade now, marriage equality has dominated the energies of gay and lesbian campaigners. So when we achieve it, we can all celebrate and relax, right? Not a chance.”

It’s been argued with justification over the years same-sex couples have not been entitled to the same legal rights as the heteros.

But, that has not been the case for some time now. Click on www.service.nsw.gov.au/transaction/apply-registered-relationship-certificate and you will see “the NSW Relationships Register provides legal recognition for de facto couples, regardless of their sex.”

Here’s Mr Copland again: “It is true that marriage has become an extremely important symbol and its passage would be seen by many as a significant milestone in indicating the willingness of the state to treat gay and lesbian people equally. Yet, unfortunately, it is little more than a symbol. In Australia marriage equality actually, has few practical impacts.” 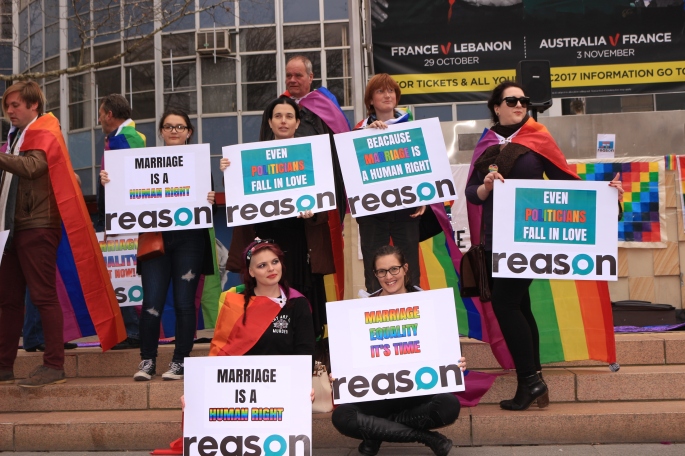 A quick look on the Internets will confirm the issue has been around for a while now. Even back to Roman times: “…in the early Imperial period some male couples were celebrating traditional marriage rites in the presence of friends. Male-male weddings are reported by sources that mock them.”

Australians are known for mocking.

Attorney General George Brandis is busy passing laws to make sure everyone conforms to his view of civilised debate, but that may be easier said than done. Gillian Triggs, when she was president of the Human Rights Commission, lamented: “Sadly you can say (outside) what you like around the kitchen table at home.”

If Steve and Kev announce at a mixed dinner party that they are now married, and a non-believer rolls his eyes and says “Of course you are”, will the hostess be obliged to call the thought police?

Emperor Nero celebrated public weddings with men, possibly once as the groom, and twice as the bride.

The ceremonies included traditional elements such as a dowry and the wearing of the Roman bridal veil. Other mature men at his court had husbands, or said they had husbands in imitation of the emperor (always good to keep on side with the boss). And yet, even though satire would have been a risky business in those days, there was still mocking.

The rector of one of Sydney’s more fashionable cathedrals told me in conversation that he was “surprised that the gays, with their lifestyles, would choose the bourgeois cul-de-sac of marriage.”

I have known a few Steve and Kevs, but some gay males of my acquaintance have admitted being hedonists, merely out for a good time. Some have complained to me that the Mardi Gras has become dull because of the lesbian influence.

Could it be – despite what Cyndi Lauper used to say – it’s the boys who just want to have fun, while the girls are earnest and political?

The rector of one of Sydney’s more fashionable cathedrals told me in conversation that he was “surprised that the gays, with their lifestyles, would choose the bourgeois cul-de-sac of marriage.”

Although male couples are mostly used to illustrate media stories (the ABC uses photographs of men who look like they could have stepped out of a Fletcher Jones window in 1956) according to the latest Fairfax-Ipsos poll, women were more likely to participate in the survey than men. It’s been claimed that most of the signatories to the AMA petition accusing anyone who opposes same sex marriage of acting like a racist are women.

Just looking at the list of names certainly seems to confirm that.

I spoke to a visiting US professor who has studied the issue extensively and put it to her from my years of discussing the issue that the big push for gay marriage seemed to be from females.

She agreed and said: “What little girl doesn’t want a big white wedding?”

Also on The Big Smoke

If a daughter’s aim is to convince Mum that marrying another woman is a real marriage just like cousin Amelia who married a man, because the “Yes” vote won and the State says so, will that satisfy Mum’s biological imperative to become a grandmother?

And speaking of lesbians, one I know told me because she couldn’t have a child that was truly hers and her lover’s, she wouldn’t be doing it.

That seemed to be a grown up position from someone who knows her own mind. “Boston Marriage” was a term used in the 19th and early 20th century to refer to two single women living together, independent of men. The term was originally coined in Henry James’ novel The Bostonians, which told the tale of an intimate companionship between two wealthy, Boston women.

But whether giving that arrangement state sanction and calling it “a marriage” will keep Mum happy when there are no grandkids seems unlikely to me. Sadly you can say what you like around the kitchen table at home.

While the ladies may love a wedding no matter what the makeup of the happy couple, I’ll put my money on biology winning in the end. Pick your poll to support your argument (although most say “Yes” will win, 67% of Telegraphreaders will say “No”).

But “Yes” or “No”, you can be sure campaigners will keep campaigning, people who don’t feel the imprimatur of the state or the church is necessary to legitimise their relationships will continue to make their own arrangements and parents who want direct descendants will still be disappointed.

Lisa Simpson, when confronted with the chant from Springfield’s gay pride marchers, “We’re here, we’re queer – get used to it” says: “You say that every year, we’re used to it.”

It’s a situation that has waxed and waned for at least a couple of thousand years that we know of, and no matter what the postman delivers, I don’t think it’s going to be resolved anytime soon.

Mike Jeffreys has been a radio broadcaster most of his working life, with occasional forays in to other media. He’s been seen lately on SKY NEWS. He has three sons and is a mediocre poker player.