AS hard as he might try, ACT Liberal senator Zed Seselja is simply not a convincing “nodder”. Contemporary political press conference nodders are a sight to behold. 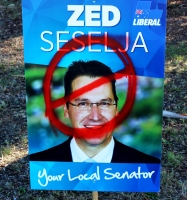 These polished performers have an impressive range of plausible, thoughtful expressions. A pensive pose, a pious pout, a deft display of disgust. But Zed’s awkward, shifty body language while standing behind the PM screamed he either didn’t want to be seen with Malcolm or that Top Hat had farted.

ABORIGINAL man Clinton Pryor walks from WA to Canberra to inform politicians of the shameful plight of his people and battles to even get past the forecourt of the Federal Parliament. 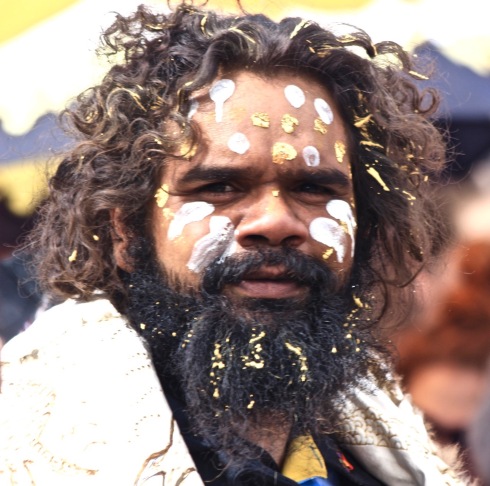 Yet if you’ve clocked up a few red-carpet miles you are greeted with a green light and a conga line of political parasites. Star of the ABC series Rake Richard Roxburgh and Emmy award winner Judy Davis headlined an all-star cast in town with a message for lawmakers. Under the banner “Make It Australian”, the group called on the government to broaden local content rules to counter the threat posed to the domestic TV and film industry by Netflix and Amazon.

A LARGE kangaroo invading a sports field in suburban Canberra is pretty much a normal occurrence, although one such incident has excited many people. A video of an eastern grey hopping around the Deakin Oval during a soccer match has gone viral on social media. I now regret not recording the large roo that made an appearance on Tuggeranong’s Greenway Oval several weeks back. The animal leapt the fence near the scoreboard, bounded through the midfield like Chris Judd in a fur coat settling in the pocket at the other end of the oval to watch the final quarter of the – until then – mundane AFL game.

STILL on social media and Canberra give yourself a row of pats-on-the-back emojis. A new study of the online habits of more than 1500 Australians has discovered that ACT residents used Twitter more (25 per cent) than any other group ahead of NSW and Victoria. The study also revealed more Canberrans use LinkedIn than any other state or territory. On average, Canberrans post on Twitter 35 times a  week.

AND what better way to consolidate our new status than to have one of the world’s most famous users of social media stop by? As POTUS will be in the neighbourhood, at the Asia-Pacific Economic Co-operation leaders’ summit in Papua New Guinea in November, the inevitable speculation is that Donald Trump drops by The Lodge to hang with his BFF Mr Trumble.

AFTER a week of sub-zero overnight temperatures the kind folk of the NT have been thinking of we poor sods here in the capital.

The “NT News” has tweeted: “Dear residents of the capital of Australia, sending you our thoughts and prayers at this difficult time. Lots of love, Darwin.” Attached to the heartwarming message was a graphic, just in case we weren’t already aware of the stark disparity of our climates.

WHILE we appreciate the warm vibes emanating from the north there are other more serious issues that twin the territories. According to “The Australian”, conservative MP Kevin Andrews has “expressed his deep disappointment” with PM Malcolm Turnbull and warned of a “secret deal” facilitated by the Prime Minister paving the way for introduction of euthanasia in the NT and ACT.

FORMER Canberra political power couple Mary Porter and Ian De Landelles may have serendipitously stumbled upon a new career in retirement. From the cluttered space of food/travel/lifestyle bloggers the pair has emerged as promising Bog Bloggers. De Landelles filed the following on his Facebook account: “On long road trips finding clean toilets is always a challenge. Just found the best one ever. Clean, odour free, hot water, soap and towels. Mary tells me the women’s even had fresh flowers.” The impressive lavatory is at Walcha, NSW.