IF the city of mostly true believers is still disappointed by the election result it could always build a bridge and get over it. Speculation of a brand, spanking new structure spanning Lake Burley Griffin might just be the tonic.

The National Capital Authority has confirmed a study of completely replacing Commonwealth Avenue Bridge will begin, rather than building a separate structure to accommodate light rail to Woden.

AND if a new bridge doesn’t do it, a naked man walking across the existing one with a pumpkin on his head surely would. Thankfully we won’t be exposed to such a spectacle after Sydney journalist Eddy Jokovich reneged on his pledge to “walk nude from Sydney to Canberra balancing a pumpkin on my head” if the coalition won the Federal election.

Pumpkinhead Eddy’s copped a shellacking on social media in the days since, pathetically responding on Twitter: “To all those perverts with their binoculars out there expecting this to happen, if the Liberals can lie and break their promises, so can I. None of the polls predicted Morrison’s re-election, few expected it. People make mistakes. Go and have a cold shower, all of you”.

Given shrinkage and Canberra’s climate, a nothing-to-see-here-folks headline has gone begging.

SCOTT Morrison’s miraculous victory has brought the “fast tracking” of Canberra’s light rail to Woden to a shuddering halt. ACT Chief Minister Andrew Barr must now explore other avenues of funding. Stage 2 was more likely under a Shorten government with its pledge of $200 million. A shellshocked Barr suggested the re-election of the coalition was “going to set back the time frame, there’s no doubting that,” with 2025 “a more realistic time frame”.

IF the next ACT election takes on a Trump/ScoMo presidential tone the Canberra Liberals will need Mark Parton as its leader. Armed with little, the local Libs won’t be able to resist a “Barr will tax you to death” version of the “Crooked Hillary” and “Shifty Bill” template which worked a treat for Donald Trump and Scott Morrison.

Morrison is the consummate salesman. Parton is a very good salesman. Both have extensive experience in media roles before entering politics and the skills to “buy and sell” career political types such as Bill Shorten and, locally, Alistair Coe. Political campaigns are now 100 per cent sizzle with no room for sausage.

WITHIN 48 hours of the first quiet murmurs of a Labor defeat turning into a loud roar, reinstated ACT Labor senator Katy Gallagher had put the bite on me. Late on Monday I received a “Don’t mourn, join” email from the former ACT chief minister. “Mike, Saturday night’s election was disappointing for Labor supporters and voters across Australia. But now it’s time to rally together and look to the fight ahead”. Before the signwriters had even reattached the shingle to her new/old office, Katy was asking me “to join our progressive movement and become a member of the ALP”.

THE once fierce resistance to Canberra’s annual kangaroo cull has dimmed over recent times, but the 2019 program targeting a record number of roos has reawakened protesters’ rage. Twenty four organisations, including filmmaker Creative Cowboy and British-based vegan charity Viva, have issued a statement condemning the killing of 4076 kangaroos and unknown numbers of joeys. The group claims: “When global scientists have issued the strongest call yet to reverse ‘nature’s dangerous decline’, the ACT government is overseeing the cruel mass slaughter of over 4000 kangaroos.”

STILL on activism; Manuka’s fashionable district is not known for its tree huggers nor is it traditionally a haven for those with a penchant for civil disobedience, which is a relief because such action is no longer necessary to save a mature London Plane tree in Franklin Street. A ruling by the Conservator for Flora and Fauna Ian Walker, has blocked the destruction of the tree standing in the way of a proposed European-style, neoclassical, seven-storey hotel near the Capitol Cinema.

THE good folk of Curtin have been very generous with donations to the recent Anglicare Pantry appeal. Volunteers spent the weekend outside the local Coles store and gathered around 5000 items. The supermarket manager says that takings were up $30,000 for the week and the food items donated during the weekend filled more than 40 trolleys. 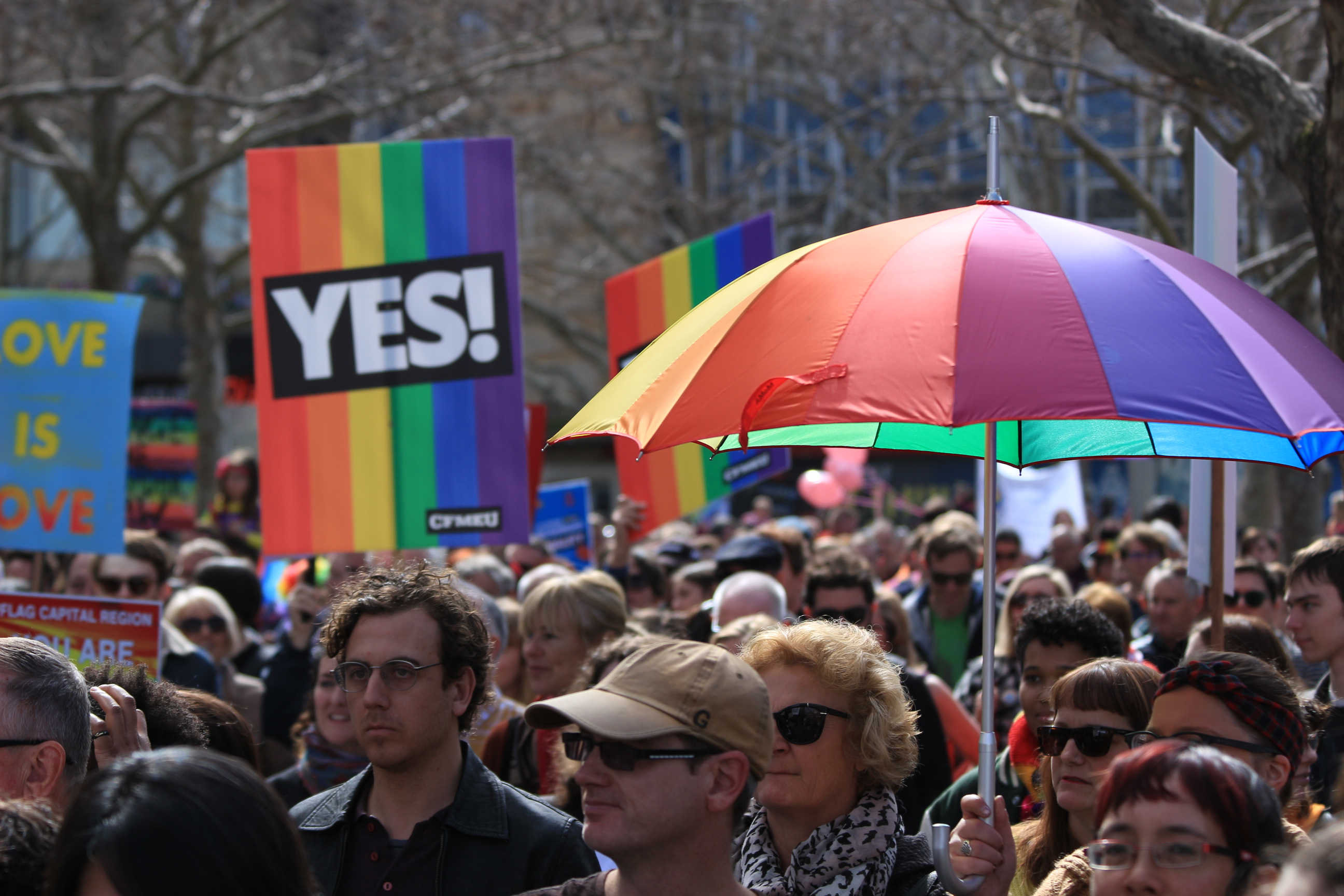 ORGANISERS estimated a crowd of 3000 turned out for today’s marriage equality rally in Civic, declaring it the “biggest LGBTI rights rally in Canberra’s history”.

The rally heard speeches from politicians including Chief Minister Andrew Barr and Federal MP Dr Andrew Leigh.“Today’s rally was the largest LGBTI rights demonstration in ACT history”, said rally organiser Con Karavias, spokesperson for Equal Love Canberra.“We are determined to use the passion and enthusiasm from today’s rally to step up our campaign so we can achieve a resounding victory.”

“We thank the thousands of ACT people who came to show their support for fairness and dignity at today’s rally.”

Speaking at the National Press Club, former Lodge dwellers Bob Hawke and John Howard – who between them led the nation for almost 20 years – lamented the lack of life skills of those currently serving the nation. The former political foes shared consensus on the contemporary crop: “Career politicians without sufficient life experience are letting the public down”. 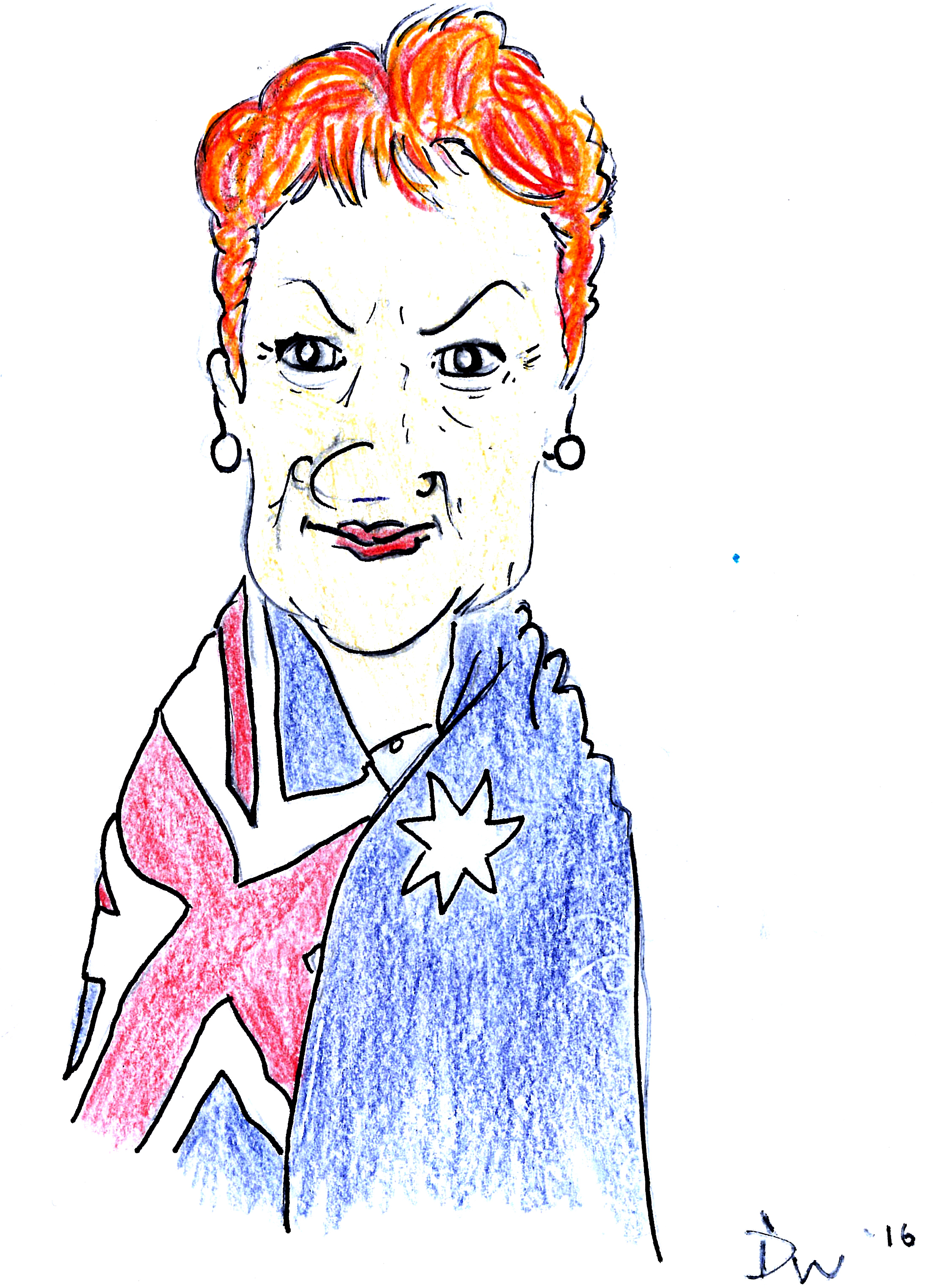 IT follows then that political advisers may also lack the necessary experience to guide their charges. Pauline Hanson’s appalling burqa stunt is a case in point. An April, 2011, op-ed in “The Australian” on political stunts, by former Hanson mentor John Pasquarelli, highlights the ineptness of today’s political minders. Pasquarelli wrote: “The desire to make the evening news makes MPs do very silly things such as fruit picking, filling sandbags, dancing and wearing silly clothes. Our elected representatives make fools of themselves and their political message is diminished. Such corny things turn the ordinary Australian off”.

STILL on stunts and there was a time if Craig Reucassel was spotted in Canberra, a message went out to pollies to make themselves scarce lest they be ambushed by a bunch of undergrad filmmakers. Craig and his “Chaser” mates forged lucrative careers through pranks that mostly saw pollies on the losing end of a stunt filmed for a television series. Reucassel, documenting the more serious topic of waste, hosting “War on Waste” for the ABC was in Canberra gathering footage for a follow up to the successful series.

THE tone of the SSM postal poll campaign may be already locked in with the gatecrashing of an anti-Safe School rally in Civic by members of the LGBTI community. Speakers, including NSW MP Fred Nile and ACL MD Lyle Sheltonwere shouted down by opponents waving rainbow flags and banners. Police report the event ended peacefully without arrests. However a spokesperson has warned of further trouble suggesting: “The LGBTI community had been passive for so long. Maybe that needs to stop because we are getting walked all over”.

MEANTIME, Shelton took to social media to express fears over what is in store for those who oppose same-sex legislation. Following an egging of the ACL’s Deakin offices Shelton tweeted: “Saturday, activists shouted down mums concerned about ‘Safe Schools’, yesterday they threatened to post ‘noxious’ substances, today this”. The lobbyist, who rarely backs down from an argument – or a media opportunity – says the ACL has been forced to employ private security and notify police weeks in advance of any rally.

AND clear positions have been taken by local media on the postal poll, at least in the case of Mix-FM’s breakfast newsreader, David Sharaz. The former SBS journalist used social media to back CM Andrew Barr, bizarrely tweeting: “Don’t worry Chief. Nobody looks back at the civil rights movement with regret. You’re on the right side of history”. And: “Rallying against marriage equality in the ACT is pointless. It’s like trying to promote smoking in a hospital”.

ASSEMBLY member for Ginninderra Tara Cheyne is finding it difficult to move forward. She continues to feature prominently on the Belconnen Community Centre website more than 18 months after leaving the organisation. Ms Cheyne resigned as chair of the BCC in December, 2015, after being pre-selected by Labor.

ACCURATE stats on people attempting suicide from the Commonwealth Avenue Bridge are scarce but such attempts, while not common, continue to occur. A Canberra man visiting the bridge several years ago, on the anniversary of his son’s suicide there, was shattered to witness police drag the body of another young man from the water. Last week one more young person jumped off the bridge during peak-hour traffic. While funding was found for a higher rail to protect cyclists from falling into traffic on the bridge, there appears no such priority to suicide proof the iconic structure.