FINALLY a clinical, calm and educated explanation of what went wrong with Karl Stefanovic. At Nine not at home. That’s a whole other story.

It seems that all it takes to tame a TV bad boy is to plonk a good woman next to him on the couch. Simple.

The Australian’s Caroline Overington has pointed out that if only we would stop clicking on Karl stories (in gossip mags) and stop clicking off commercial TV and if Nine had been a bit more grown up over the (reasonable) demands of Lisa Wilkinson this whole circus would have folded its tent months ago.

“The Nine Network is looking for ways to survive in this new environment. That’s why this year it bought Fairfax Media, not for the investigative journalism but for the online properties, especially real estate website Domain, and for Stan, the streaming service, which is perhaps the future.

Apparently the two major TV breakfast shows — Today on the Nine Network and Sunrise on Seven — simply don’t pull the punters in they way they once did.

— if he’d had a supportive woman by his side on the Today couch, somebody mature enough to understand that long marriages do sometimes end, that people can and do move on, that it’s nobody’s business really, that everything will be OK, provided the kids are all right …

And is there such a supportive woman out there?

“Lisa Wilkinson! Karl’s on-screen partner for a decade. But Nine let Lisa walk. At a time of its great, existential crisis, for the sake of maybe $200,000 a year — a couple of Chicken Tonight ads — they let the most mature and stable presence on the show walk out the door”.

Just like the dinosaurs of our contempory political movements and their new “endose a women” mantra, the boys in TV are reportedy turning breakfast TV on its head with Nine – according to an insider- seriously searching for two women to wake up with. Lisa Wilkinson back on the breakfast couch while Karl sleeps off a hangover from another time in another room.

There was an extra layer of political anticipation swirling in the air in Canberra this morning. Of course it was the day after Treasurer Scott Morrison’s maiden budget, but most of the serious media circus which had pitched a tent on the lawns of Parliament House had already metaphorically moved on.
The “ho hum” budget had to be addressed yes, but the real story has been the real story for weeks: The Federal election.

All the usual performers, most with an unnecessary extra layer of clothing, were there, including 7s Sunrise co-host David Koch. “Kochie” was flying solo on the breakfast TV stool but didn’t have to worry for lack of female company as producers lined up three of the “glammest” girls to giggle and grapple with the fiscal fundamentals with the financial nerd on financial nerd’s biggest day.

Nine’s Karl and Lisa made the effort and tripped to the Capital to bring the Canberra action as it happened, to their TODAY viewers. 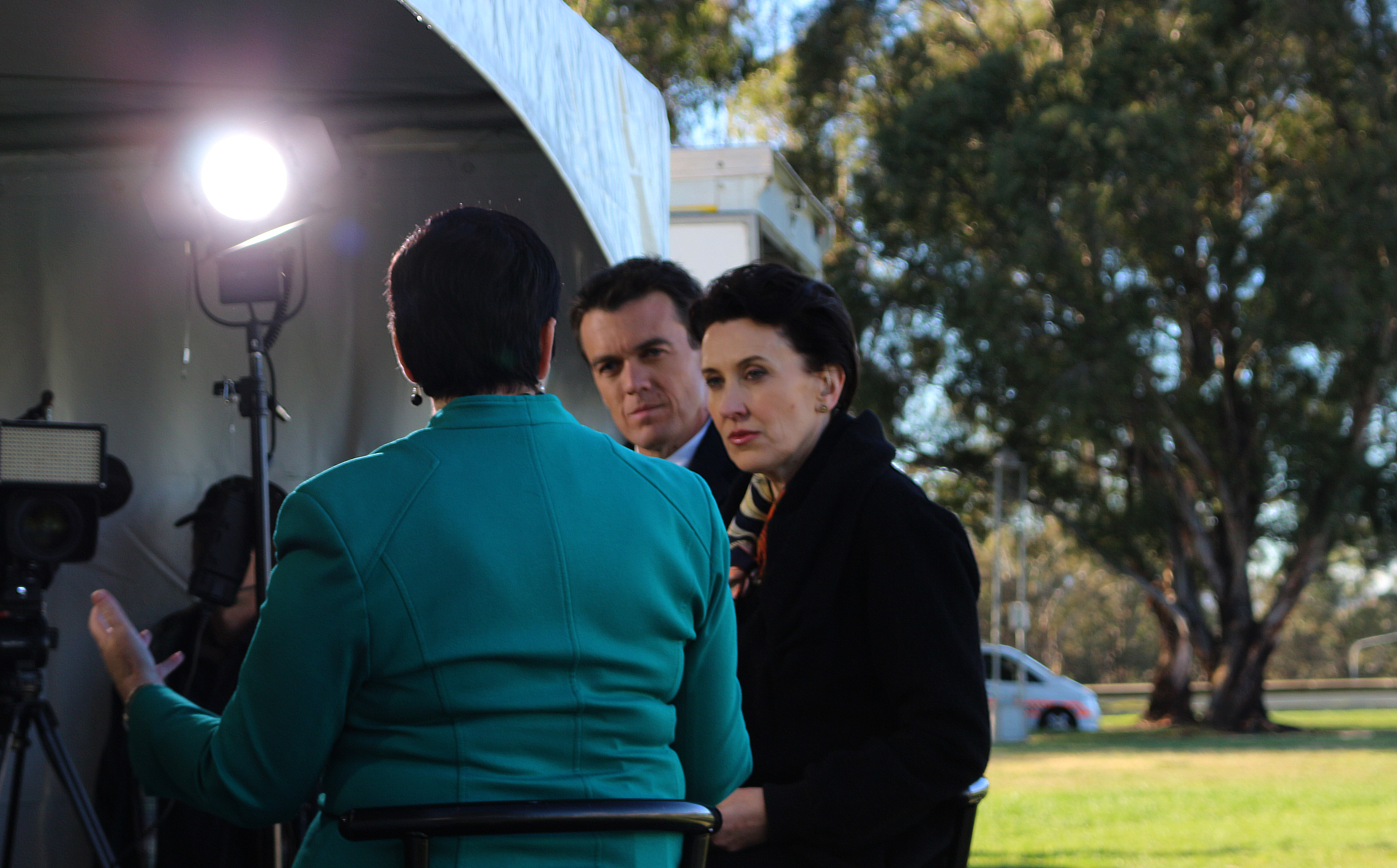 Even the “alternative” TV breakfast option, La Trioli and the mild mannered Michael Rowland deemed the event important enough to drop by and rightly poke fun at the mantra of the day “jobs and Growth”.

But it was the unexpected “pop up” of an unexpected visitor, in the company of some strange political bedfellows which literally stole the show. A Sunrise Producer was heard pleading with one of the scores of AFP officers that the union mob with the smiling Tony Abbott cardboard cutout was cutting into their broadcast. And they were. They even had their own “floor manager” who was directing the comrade holding Abbott into the optimum possie for some national TV exposure. Story goes the unions had agreed to protest at the other end of the lawn from the TV network tent embassy. But they couldn’t resist an opportunity to photo-bomb on national TV.

For the first time in modern history one of the great mysteries of society can now be revealed.

The real reason canines the world over, upon meeting one another, first sniff each other’s behinds.

You may be surprised to know that the Captain of the Seven Network’s Sunrise couch David Koch played a significant role in this anthropological unpacking.

A few years back, as I was preparing to enter the great unknown world of grandparenthood, I experienced for the first time in my life, a light-bulb moment. My expectant daughter had asked what I’d like to be called. Under no circumstances would I cop Pop, Poppy, Papa or Grandad. On this I was unbendable. It created a problem – there weren’t a whole bunch of other options. Sir, Mr Welsh and Michael were quickly scuttled. Then early one morning, right there on my TV, not 2 metres in front of me and 3 metres behind David Koch in Martin Place outside the Seven Sydney studios was my inspiration.

Among the horde of fans peering through the window and waving their arms about like monkeys on red cordial hoping someone back home in Traralgon spots them, Champion was holding up a sign which read “Hi G Dad”. Bingo. At that pivotal moment I called “shotgun” on G Dad, a full two months out from the scheduled birth of my first grandchild.

I’m not sure if old mate had indolently scribbled “G Dad” as an abbreviation, or did in fact refer to his Grandfather by the very cool moniker of G Dad and I will never know. I choose, however, to go with lazy abbreviator option.

Amid the euphoria, I realised a sweet irony. Slap bang in the middle of my epiphany, Kochie let one rip. As yet another of his famous Dad jokes was zinging its way around Australia forcing hundreds of thousands of bleary eyed people to groan simultaneously, I invented the G Dad Joke.

In less time than it takes to say “pull my finger” I had discovered a brand new comedy genre.

I could drag out a whole pile of stale old gags and stories on which David Koch dines out daily to a know-all and unappreciative audience and present as a wise old man imparting rare knowledge.

I’ve written a constitution for those who eventually qualify to become serious practitioners of G Dad jokes, hereafter to be known as GDJ.

The audience or recipient of your shamelessly recycled gag or story must be under the age of five. The joke has to be slightly educational, of some substance, have a narrative and contain some bodily functions (optional but I do recommend it or your career as a teller of champagne G Dad jokes may be embarrassingly brief). A GDJ can also be peppered with words and phrases such as Farty Pants, Poo Head and Flabby Bum. And females can’t, as evidenced by the decline in the effectiveness of the common DadJoke, participate. It’s a seriously slippery slope once girls are permitted to join in. It’s just a rule. Most importantly the GDJ must have a narrative. By the age of three, most kids are curious about a lot of random stuff and they can’t be easily fobbed off. They may ask their parents for example, why doggies smell each other’s bottoms. Most parents don’t know the answer anyway. Enter G Dad and his special skills.

Once upon a time all the dogs in the village were called to a special meeting in the town hall. There had been an issue of some dogs cocking their legs and weeing on the statue of the village founder, Sir Humphrey Hounddog. As the dogs filed into the hall they passed a sign which read PLEASE HANG YOUR BUM ON THE HOOKS PROVIDED BEFORE ENTERING THE HALL. About halfway through the meeting as the Mayor, Sir Winston Bulldog was yapping on about statue weeing, the fire alarm rang, which sent all the dogs racing out of the hall. However, in the confusion they grabbed the wrong bottoms from the hooks in the foyer in the hall and that is why to this very day a doggy will leave his juicy bone and sniff another dog’s butt in a desperate bid to find his own. Humanity thanks you, David Koch.