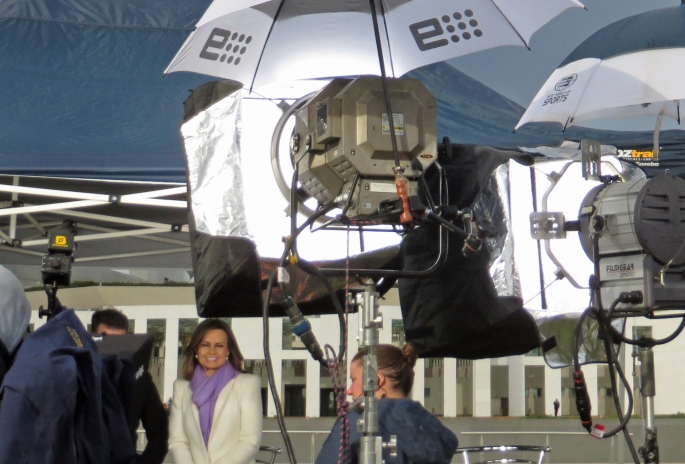 FINALLY a clinical, calm and educated explanation of what went wrong with Karl Stefanovic. At Nine not at home. That’s a whole other story.

It seems that all it takes to tame a TV bad boy is to plonk a good woman next to him on the couch. Simple.

The Australian’s Caroline Overington has pointed out that if only we would stop clicking on Karl stories (in gossip mags) and stop clicking off commercial TV and if Nine had been a bit more grown up over the (reasonable) demands of Lisa Wilkinson this whole circus would have folded its tent months ago.

“The Nine Network is looking for ways to survive in this new environment. That’s why this year it bought Fairfax Media, not for the investigative journalism but for the online properties, especially real estate website Domain, and for Stan, the streaming service, which is perhaps the future.

Apparently the two major TV breakfast shows — Today on the Nine Network and Sunrise on Seven — simply don’t pull the punters in they way they once did.

— if he’d had a supportive woman by his side on the Today couch, somebody mature enough to understand that long marriages do sometimes end, that people can and do move on, that it’s nobody’s business really, that everything will be OK, provided the kids are all right …

And is there such a supportive woman out there?

“Lisa Wilkinson! Karl’s on-screen partner for a decade. But Nine let Lisa walk. At a time of its great, existential crisis, for the sake of maybe $200,000 a year — a couple of Chicken Tonight ads — they let the most mature and stable presence on the show walk out the door”.

Just like the dinosaurs of our contempory political movements and their new “endose a women” mantra, the boys in TV are reportedy turning breakfast TV on its head with Nine – according to an insider- seriously searching for two women to wake up with. Lisa Wilkinson back on the breakfast couch while Karl sleeps off a hangover from another time in another room.

There was an extra layer of political anticipation swirling in the air in Canberra this morning. Of course it was the day after Treasurer Scott Morrison’s maiden budget, but most of the serious media circus which had pitched a tent on the lawns of Parliament House had already metaphorically moved on.
The “ho hum” budget had to be addressed yes, but the real story has been the real story for weeks: The Federal election.

All the usual performers, most with an unnecessary extra layer of clothing, were there, including 7s Sunrise co-host David Koch. “Kochie” was flying solo on the breakfast TV stool but didn’t have to worry for lack of female company as producers lined up three of the “glammest” girls to giggle and grapple with the fiscal fundamentals with the financial nerd on financial nerd’s biggest day.

Nine’s Karl and Lisa made the effort and tripped to the Capital to bring the Canberra action as it happened, to their TODAY viewers.

Even the “alternative” TV breakfast option, La Trioli and the mild mannered Michael Rowland deemed the event important enough to drop by and rightly poke fun at the mantra of the day “jobs and Growth”.

But it was the unexpected “pop up” of an unexpected visitor, in the company of some strange political bedfellows which literally stole the show. A Sunrise Producer was heard pleading with one of the scores of AFP officers that the union mob with the smiling Tony Abbott cardboard cutout was cutting into their broadcast. And they were. They even had their own “floor manager” who was directing the comrade holding Abbott into the optimum possie for some national TV exposure. Story goes the unions had agreed to protest at the other end of the lawn from the TV network tent embassy. But they couldn’t resist an opportunity to photo-bomb on national TV.

It’s just not natural.  A trench coat should be stained with other unmentionable matter not Choc Tops and Popcorn.

“FSG” has aroused “serious” discussion and pricked some serious feminist consciences even on the commercial couches of our TV breakfast shows.  “Today” co-host Lisa Wilkinson was completely underwhelmed with FSG.  Worst movie she’d seen she said. But over at Mamamia, Mia Freedman sturdily disagreed. Ms Freedman could not see anything wrong with the film.

The book by E L James sold by the pallet load at “all good book stores” like Big W and even scored a book deal for her husband, Niall Leonard,  a serious writer before the chick lit hit the fan.

I haven’t read or seen FSG and I won’t, but I know pornography when I hear it. Anyway I am far too busy knocking out my own piece of “racy” lit in the hope of selling a pallet load.

DIRTY DAVINA’S KISS MY WHIP MASSAGE PARLOUR….Page One Chapter One…“It was still dark outside as Irish Backpacker Davina Donnelly slovenly dragged herself off the filthy mattress she’d drunkenly slumped onto only hours before. She clumsily put on the red underwear she’d randomly scooped up from a pile of clothes scattered across the floor of the dank and dingy apartment.

But as she pulled the faded 301s up over her long slender legs she heard a spine-chilling scream from the mattress below her.  It was Oscar… “you can take my jocks but you can never take my Levis”